The most recent cohort of Jelf graduates have signed up to one of the excellent challenges set by the charity Princes Trust: The Million Makers Challenge.

The team were entered into the south west regional leg of the challenge. Where they were tasked with raising a minimum of £10,000 for the Princes Trust [https://www.princes-trust.org.uk/]. Through business plans, pitches and seed funding the team who raise the most will have the opportunity to attend the prestigious UK final taking place in London and compete against the best from around the UK. 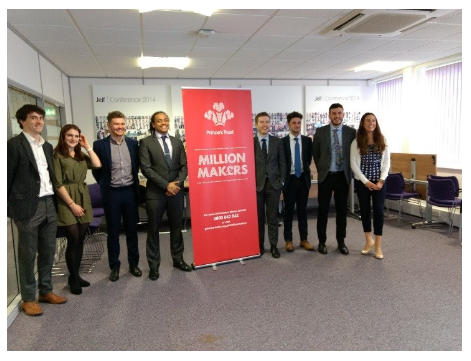 The Prince’s Trust is a charity that helps young people who are unemployed or struggling at school to transform their lives. Many of the young people the trust help are in, or leaving, care. They face issues such as homelessness or mental health issues, or have been in trouble with the law. This is a fantastic opportunity for the graduate academy with the support of the business to help raise money for such an influential charity.

Our graduate team attended the Million Makers dragons den pitch in Bristol at the end of June where they presented their business plan to a panel of judges. These judges had the ultimate decision over whether the team would receive seed funding and be authorised to proceed.

The team were praised for their efforts in the challenge so far and their ability to adapt and receive feedback. Due to their hard work and winning ideas they were awarded seed funding of £1,500!
The fundraising window for the Million Makers Challenge is from 1 July to 31 December. The team have six months to raise £10k for The Prince’s Trust.